The grave of Abu Mansoor Al-Amriki. We will remember him forever. Personal death notice and the information about the deceased. [86209949-en]
to show all important data, death records and obituaries absolutely for free!
6 May
Sunday
29 years
10721 days
12 September
Thursday
Images 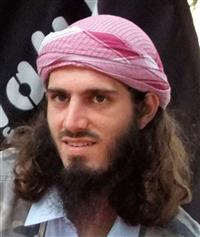 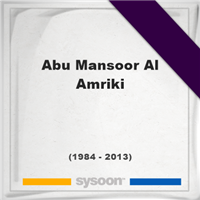 Place of birth:
United States (us)
Place of death:
Somalia (so)

Abu Mansoor Al-Amriki also known by the pseudonym Abu Mansoor Al-Amriki (Arabic: أبو منصور الأمريكي‎, Abū Manṣūr al-Amrīkī), was an American citizen who was a member and leader in the Somali Islamist militant group al-Shabaab. In November 2012, the FBI added Hammami to its Most Wanted Terrorist list. A federal warrant for his arrest was issued in 2007.

A memorial service for Abu Mansoor Al-Amriki. Information about event on Sysoon. [86209949-en]

Address and location of Abu Mansoor Al-Amriki which have been published. Click on the address to view a map.

QR Codes for the headstone of Abu Mansoor Al-Amriki

Sysoon is offering to add a QR code to the headstone of the deceased person. [86209949-en]

QR code for the grave of Abu Mansoor Al-Amriki