The grave of Ben Kuroki. We will remember him forever. Personal death notice and the information about the deceased. [86217114-en]
to show all important data, death records and obituaries absolutely for free!
16 May
Wednesday
98 years
35902 days
1 September
Tuesday
Images 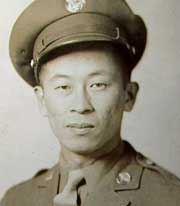 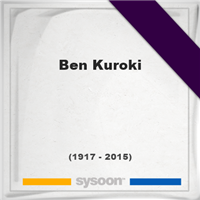 Biography and Life of Ben Kuroki

was the only American of Japanese descent in the United States Army Air Forces to serve in combat operations in the Pacific theater of World War II. He flew a total of 58 combat missions during World War II. Ben Kuroki was born in Gothenburg, Nebraska, United States to Japanese immigrants, Shosuke and Naka (née Yokoyama) Kuroki on May 16, 1917. They had 10 children. When he was a year old the Kuroki family relocated to Hershey, Nebraska, where they owned and operated a farm. The Lincoln County town had a population of about 500. He attended Hershey High School and was the Vice-President of his senior class, graduating in 1936.

Note: Do you have a family photo of Ben Kuroki? Consider uploading your photo of Ben Kuroki so that your pictures are included in Ben Kuroki's genealogy, family trees & family history records. Sysoon enables anyone to create a free online tribute for a much loved relative or friend who has passed away.

A memorial service for Ben Kuroki. Information about event on Sysoon. [86217114-en]

Address and location of Ben Kuroki which have been published. Click on the address to view a map.

QR Codes for the headstone of Ben Kuroki

Sysoon is offering to add a QR code to the headstone of the deceased person. [86217114-en]

QR code for the grave of Ben Kuroki