The grave of Chérif Kouachi. We will remember him forever. Personal death notice and the information about the deceased. [86214602-en]
to show all important data, death records and obituaries absolutely for free!
29 November
Monday
32 years
11729 days
9 January
Friday
Images 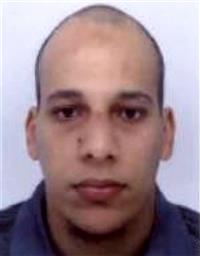 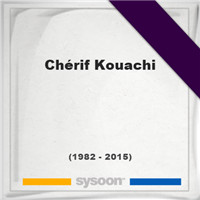 Biography and Life of Chérif Kouachi

as the main suspects of being the masked gunmen. The two Muslim Franco-Algerian French nationals, both from Gennevilliers, were aged 34 and 32 respectively. Their parents were Algerian immigrants to France. The brothers were orphaned at a young age, and Chérif was raised in foster care in Rennes before he joined his brother in Paris. Chérif, also known as Abu Issen, was part of the "Buttes-Chaumont network" (fr) (named after the Parc des Buttes Chaumont where they met and performed military-style training exercises) that helped send would-be jihadists to fight for al-Qaeda in Iraq after the 2003 invasion. He was arrested at age 22 in January 2005 when he and another man were about to leave for Bashar al-Assad's Syria – at the time a gateway for jihadists wishing to fight U.S. troops in Iraq. He went to Fleury-Mérogis Prison - Amedy Coulibaly met him in this prison. In prison together Kouachi and Coulibaly found a mentor, Djamel Beghal, who had been sentenced to 10 years in prison in France in 2001 for his part in a plot to bomb the United States embassy in Paris. Beghal had once been a regular worshipper at Finsbury Park mosque in London and a disciple of the radical preachers Abu Hamza and Abu Qatada.

On leaving prison Chérif Kouachi married and got a fish counter job on the outskirts of Paris. He became a student of Farid Benyettou, a radical Muslim preacher at the Addawa Mosque in the 19th arrondissement of Paris. Kouachi wanted to attack Jewish targets in France, but Benyettou told him that France, unlike Iraq, was not "a land of jihad"

A memorial service for Chérif Kouachi. Information about event on Sysoon. [86214602-en]

Address and location of Chérif Kouachi which have been published. Click on the address to view a map.

Chérif Kouachi was born in France.

QR Codes for the headstone of Chérif Kouachi

Sysoon is offering to add a QR code to the headstone of the deceased person. [86214602-en]

QR code for the grave of Chérif Kouachi