The grave of Christine Arnothy. We will remember him forever. Personal death notice and the information about the deceased. [86217399-en]
to show all important data, death records and obituaries absolutely for free!
20 November
Thursday
84 years
31001 days
6 October
Tuesday
Images 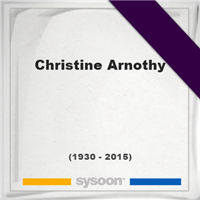 Biography and Life of Christine Arnothy

was a French writer. She has written numerous books, including J'ai quinze ans et je ne veux pas mourir (1955) ('I am Fifteen and I Do Not Want to Die'). Arnothy eventually married Claude Bellanger (1909–1978). Arnothy was born in Budapest, Hungary.

J'ai quinze ans et je ne veux pas mourir is based on her diary, which recorded her experience as a teenager during the 1945 siege of Budapest. Arnothy fled Hungary with her parents. When she arrived in France, her diary was the only possession she still had. The book was reviewed in Harper's Magazine in 1956. It received good reviews also from The Daily Express, The New York Times, Herald Tribune, San Francisco Examiner, Kirkus, L.A. Herald Express, Chicago Sunday Tribune and The Times. She later published a sequel, It Is Not So Easy to Live, a second part which does not come from her journal but from her memory; she chronicles her escape via Vienna to Paris, where she eventually settled and married.

A memorial service for Christine Arnothy. Information about event on Sysoon. [86217399-en]

Address and location of Christine Arnothy which have been published. Click on the address to view a map.

Christine Arnothy was born in Hungary.

QR Codes for the headstone of Christine Arnothy

Sysoon is offering to add a QR code to the headstone of the deceased person. [86217399-en]

QR code for the grave of Christine Arnothy