The grave of Jackie Brown. We will remember him forever. Personal death notice and the information about the deceased. [86227287-en]
to show all important data, death records and obituaries absolutely for free!
2 March
Saturday
84 years
30997 days
12 January
Sunday
Images 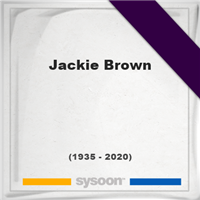 Biography and Life of Jackie Brown

was a Scottish flyweight boxer who was a British and Commonwealth flyweight champion. He was born in Edinburgh, Scotland. Brown had his first professional fight on 16 October 1958, in Paisley, defeating Mark Quinn in the third round on a technical knockout.

He won his first fifteen fights before losing two in succession, to Derek Lloyd and Freddie Gilroy.

In October 1961, he defeated the young Walter McGowan in only his third fight, winning on points over eight rounds in Paisley.

In his next fight, in February 1962, he fought for the vacant British flyweight title. The fight was in Birmingham against Brian Cartwright, and Brown won on points over fifteen rounds.

In December 1962, he fought for the vacant Commonwealth flyweight title, against Orizu Obilaso, of Nigeria. Brown was knocked down in the second round but went on to win on points.

Note: Do you have a family photo of Jackie Brown? Consider uploading your photo of Jackie Brown so that your pictures are included in Jackie Brown's genealogy, family trees & family history records. Sysoon enables anyone to create a free online tribute for a much loved relative or friend who has passed away.

A memorial service for Jackie Brown. Information about event on Sysoon. [86227287-en]

Address and location of Jackie Brown which have been published. Click on the address to view a map.

QR Codes for the headstone of Jackie Brown

Sysoon is offering to add a QR code to the headstone of the deceased person. [86227287-en]

QR code for the grave of Jackie Brown