The grave of James Q. Wilson. We will remember him forever. Personal death notice and the information about the deceased. [86207222-en]
to show all important data, death records and obituaries absolutely for free!
27 May
Wednesday
80 years
29500 days
2 March
Friday
Images 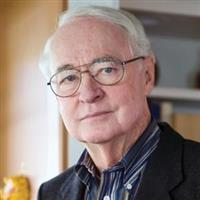 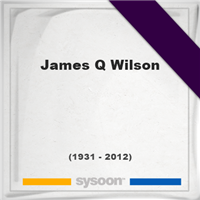 He was an American academic political scientist and an authority on public administration.He was perhaps most famous for his work (with George Kelling and Catherine Coles) of the "broken windows" theory of law enforcement. Wilson and co-author George L. Kelling argued in The Atlantic article that communities must address minor crimes and their effects, such as broken windows, to prevent larger problems from developing. Those ideas influenced successful community policing efforts in cities including New York and Los Angeles. Last month, Detroit announced it was beginning its own initiative.

A memorial service for James Q. Wilson. Information about event on Sysoon. [86207222-en]

Address and location of James Q. Wilson which have been published. Click on the address to view a map.

QR Codes for the headstone of James Q. Wilson

Sysoon is offering to add a QR code to the headstone of the deceased person. [86207222-en]

QR code for the grave of James Q. Wilson