The grave of Jayalath Manoratne. We will remember him forever. Personal death notice and the information about the deceased. [86227290-en]
to show all important data, death records and obituaries absolutely for free!
12 June
Saturday
71 years
26146 days
12 January
Sunday
Images 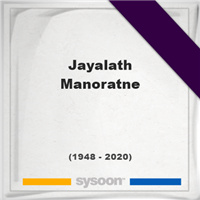 Biography and Life of Jayalath Manoratne

was an award-winning Sri Lankan actor in Sri Lankan cinema, stage drama and television. He was a lecturer by profession as well as a director and producer. A Highly versatile actor who ranged from drama to comedy, Manoratne won awards includung from OCIC, Presidential, Sarasavi, Raigam Tele'es, Sumathi and the State Literary and Drama awards. He was the best actor back to back in 1991 and 1992 for his performance in Socrates and Dvitva. He is considered by critics as one of he five actors who have dominated the Sri Lankan Stage .

A memorial service for Jayalath Manoratne. Information about event on Sysoon. [86227290-en]

Address and location of Jayalath Manoratne which have been published. Click on the address to view a map.

QR Codes for the headstone of Jayalath Manoratne

Sysoon is offering to add a QR code to the headstone of the deceased person. [86227290-en]

QR code for the grave of Jayalath Manoratne