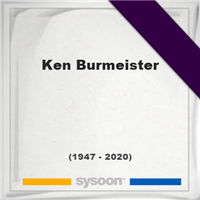 was an American college basketball coach. He was most recently the head coach of the University of the Incarnate Word for 12 seasons until 2018.

Burmeister graduated from St. Mary's University, Texas and served on the staff of Lute Olson at Iowa and Arizona from 1979 to 1986. Burmeister coached at University of Texas at San Antonio from 1986 to 1990 and led the team to its first appearance in the NCAA Tournament in 1988, where they lost to Illinois. He served as an assistant coach at DePaul before taking over at Loyola (IL) in 1994. He posted a 40-71 record at Loyola and oversaw the team's move to Joseph J. Gentile Arena in 1996. Burmeister coached at Trinity University in San Antonio, Texas from 1998 to 1999. He died on May 19, 2020 from cancer.

A memorial service for Ken Burmeister. Information about event on Sysoon. [86228114-en]

Ken Burmeister at Archives.com. What is Archives

Military records of Ken Burmeister at Fold3.com.  What is Fold3

Address and location of Ken Burmeister which have been published. Click on the address to view a map.

QR Codes for the headstone of Ken Burmeister

Sysoon is offering to add a QR code to the headstone of the deceased person. [86228114-en]

QR code for the grave of Ken Burmeister