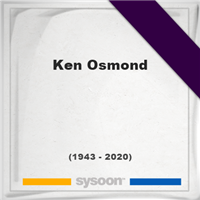 was an American actor and police officer. Beginning a career as a child actor at the age of four, Osmond played the role of Eddie Haskell on the late 1950s to early 1960s television situation comedy Leave It to Beaver and reprised it on the 1980s revival series The New Leave It to Beaver. Typecast by the role, he found it hard to get other acting work and became a Los Angeles police officer. After retiring from police work, he resumed his acting career.Osmond was born in Glendale, California, the son of Pearl (Hand) and Thurman Osmond. His father was a carpenter and propmaker and his mother, whom he described as "a typical movie mother," had ambitions to get him and his brother, Dayton, into acting. Osmond began going on professional auditions at the age of four, and began working in commercials. His mother took her sons to acting classes every day after school; he eventually studied dance, drama, diction, dialects, martial arts, and equestrian riding.

A memorial service for Ken Osmond. Information about event on Sysoon. [86228109-en]

Ken Osmond at Archives.com. What is Archives

Military records of Ken Osmond at Fold3.com.  What is Fold3

Address and location of Ken Osmond which have been published. Click on the address to view a map.

QR Codes for the headstone of Ken Osmond

Sysoon is offering to add a QR code to the headstone of the deceased person. [86228109-en]

QR code for the grave of Ken Osmond Note: Do you have a family photo of Ken Osmond? Consider uploading your photo of Ken Osmond so that your pictures are included in Ken Osmond's genealogy, family trees & family history records. Sysoon enables anyone to create a free online tribute for a much loved relative or friend who has passed away.