The grave of Magali Noëlle Guiffray. We will remember him forever. Personal death notice and the information about the deceased. [86216531-en]
to show all important data, death records and obituaries absolutely for free!
27 June
Saturday
83 years
30677 days
23 June
Tuesday
Images 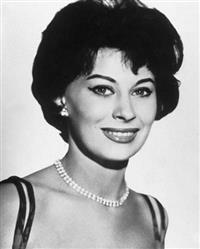 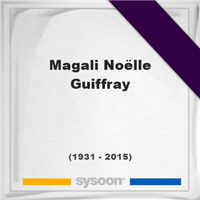 better known as Magali Noël, was a French actress and singer.

Born in Izmir to French parents in the diplomatic service, she left Turkey for France in 1951, and her acting career began soon thereafter. She acted in multilingual cinema chiefly from 1951 to 1980, appearing in several Italian films directed by Federico Fellini, for whom she was a favourite performer. She acted in films directed by Costa Gavras, Jean Renoir, and Jules Dassin. Her career extended to television movies from roughly 1980 to 2002.[citation needed]

Her recording career began in France in 1956, and her most famous song was "Fais-moi mal, Johnny" ("Hurt me Johnny"), written by Boris Vian. This song was one of the first rock 'n' roll songs with French lyrics. It was censored from the radio due to its risqué lyrics.

A memorial service for Magali Noëlle Guiffray. Information about event on Sysoon. [86216531-en]

Address and location of Magali Noëlle Guiffray which have been published. Click on the address to view a map.

QR Codes for the headstone of Magali Noëlle Guiffray

Sysoon is offering to add a QR code to the headstone of the deceased person. [86216531-en]

QR code for the grave of Magali Noëlle Guiffray