The grave of Maureen O'Hara. We will remember him forever. Personal death notice and the information about the deceased. [86217533-en]
to show all important data, death records and obituaries absolutely for free!
17 August
Tuesday
95 years
34766 days
24 October
Saturday
Images 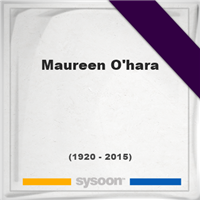 Biography and Life of Maureen O'Hara

was an Irish-American actress and singer. The famously red-headed O'Hara was known for playing fiercely passionate but sensible heroines, and often worked with director John Ford and longtime friend John Wayne. She was one of the last surviving stars from the Golden Age of Hollywood.

From an early age, she wanted to become an actress and took lessons. She was given a screen test, which was deemed unsatisfactory, but Charles Laughton saw something in her when he later saw it. He arranged for her to co-star with him in the 1939 British film Jamaica Inn. She also co-starred with him in the Hollywood production of The Hunchback of Notre Dame, released the same year. From there, she went on to enjoy a long and highly successful career. She made a number of films with John Wayne – the actor with whom she is most closely associated – and director John Ford, often both together in the same production; several were westerns, a notable exception being The Quiet Man (1952). She also starred in swashbucklers such as The Black Swan (1942), opposite Tyrone Power, and Sinbad the Sailor (1947), with Douglas Fairbanks, Jr., as well as the Christmas classic Miracle on 34th Street (1947), with John Payne, Natalie Wood and Edmund Gwenn.

A memorial service for Maureen O'Hara. Information about event on Sysoon. [86217533-en]

Address and location of Maureen O'Hara which have been published. Click on the address to view a map.

Maureen O'Hara was born in Ireland.

QR Codes for the headstone of Maureen O'Hara

Sysoon is offering to add a QR code to the headstone of the deceased person. [86217533-en]

QR code for the grave of Maureen O'Hara