The grave of Noble Ray Price. We will remember him forever. Personal death notice and the information about the deceased. [86210842-en]
to show all important data, death records and obituaries absolutely for free!
12 January
Tuesday
87 years
32115 days
16 December
Monday
Images 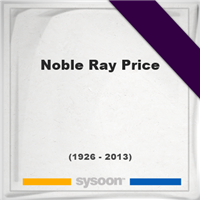 Noble Ray Price was an American country music singer, songwriter, and guitarist. His wide ranging baritone has often been praised as among the best male voices of country music. Some of his well-known recordings include "Release Me", "Crazy Arms", "Heartaches by the Number", "For the Good Times", "Night Life", and "You're the Best Thing That Ever Happened to Me". He was elected to the Country Music Hall of Fame in 1996 and—even into his late 80s—continued to record and tour.

A memorial service for Noble Ray Price. Information about event on Sysoon. [86210842-en]

Address and location of Noble Ray Price which have been published. Click on the address to view a map.

QR Codes for the headstone of Noble Ray Price

Sysoon is offering to add a QR code to the headstone of the deceased person. [86210842-en]

QR code for the grave of Noble Ray Price