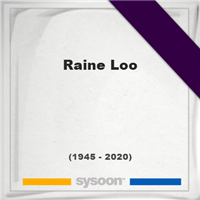 was an Estonian stage, television and film actress. Raine Loo was born in the former Taevere Parish in Viljandi County, which is now part of Põhja-Sakala Parish. She attended No. 8 School in Tartu (now, the Tartu Forselius School), graduating in 1963. Afterward, she studied acting at the Vanemuine teaching studio, where she graduated from in 1965. In 1965, Loo became engaged at the Vanemuine theatre as an actress. Her first major role at the Vanemuine was that of Ingrid in a 1965 production of Mati Unt's See maailm või teine. Notable performances at the Vanemuine have included roles in works by such varied international authors and playwrights as: Shakespeare, Chekhov, Johann Wolfgang von Goethe, T. S. Eliot, Molière, Maxim Gorky, Ion Druță, Friedrich Schiller, Witold Gombrowicz and Arthur Miller, among others. Roles in productions of Estonian authors and playwrights include: Lilli Promet, Oskar Luts, August Kitzberg, Anton Hansen Tammsaare, Karl Ristikivi and Mart Kivastik.

Raine Loo would remain at the Vanemuine until her dismissal from the theatre in 2004, nearly forty years after she began her engagement.

A memorial service for Raine Loo. Information about event on Sysoon. [86228091-en]

Raine Loo at Archives.com. What is Archives

Military records of Raine Loo at Fold3.com.  What is Fold3

Address and location of Raine Loo which have been published. Click on the address to view a map.

Raine Loo was born in Estonia.

QR Codes for the headstone of Raine Loo

Sysoon is offering to add a QR code to the headstone of the deceased person. [86228091-en]

QR code for the grave of Raine Loo Note: Do you have a family photo of Raine Loo? Consider uploading your photo of Raine Loo so that your pictures are included in Raine Loo's genealogy, family trees & family history records. Sysoon enables anyone to create a free online tribute for a much loved relative or friend who has passed away.