The grave of Tom Long. We will remember him forever. Personal death notice and the information about the deceased. [86227275-en]
to show all important data, death records and obituaries absolutely for free!
3 August
Saturday
51 years
18781 days
4 January
Saturday
Images 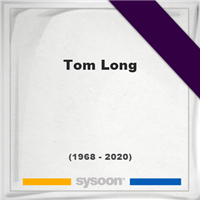 Biography and Life of Tom Long

was an Australian film and television actor. He played court official and avid surfer Angus in the late 1990s TV series SeaChange and Brendon Abbott in the 2003 Australian TV movie The Postcard Bandit. Long was born on 3 August 1968 in Boston, Massachusetts, as his Australian parents were visiting there at the time. On their return to Australia he grew up on a farm near Benalla, Victoria. He worked as a jackaroo and shearer after attending Geelong Grammar School, before going abroad, travelling to India, the United Kingdom, Los Angeles, and South Carolina.

After returning to Australia, Long successfully auditioned for a place at the National Institute of Dramatic Art, graduating in 1994.

Note: Do you have a family photo of Tom Long? Consider uploading your photo of Tom Long so that your pictures are included in Tom Long's genealogy, family trees & family history records. Sysoon enables anyone to create a free online tribute for a much loved relative or friend who has passed away.

A memorial service for Tom Long. Information about event on Sysoon. [86227275-en]

Address and location of Tom Long which have been published. Click on the address to view a map.

QR Codes for the headstone of Tom Long

Sysoon is offering to add a QR code to the headstone of the deceased person. [86227275-en]

QR code for the grave of Tom Long