The grave of Albert Francis Molinaro. We will remember him forever. Personal death notice and the information about the deceased. [86217564-en]
to show all important data, death records and obituaries absolutely for free!
24 June
Tuesday
96 years
35192 days
30 October
Friday
Images 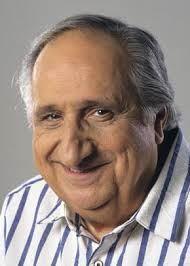 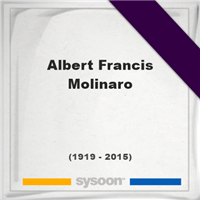 was an American actor. He was best known for his television sitcom roles as Al Delvecchio on Happy Days and Murray Greshler on The Odd Couple. He also starred in TV commercials for On-Cor frozen dinners for 16 years. Molinaro was born and raised in the Kenosha, Wisconsin, neighborhood of Columbus Park, the son of Italian immigrants Raffaele and Teresa Molinaro. His father was a prominent tavern/restaurant/hotel owner, and a leader of the Kenosha Italian community who financially sponsored hundreds of Italians to immigrate to the United States.[citation needed] Molinaro was the youngest of 10 children. His brother Joseph was Kenosha County's longest-serving district attorney and retired as a municipal judge, and his brother George served 30 years in the Wisconsin State Assembly, including one session as Speaker.

In 1948, Molinaro married Jacquelin Martin, with whom he had a son, Michael. The couple divorced.

Molinaro moved to California in the early 1950s and worked odd jobs, finally saving enough money to start his own collection agency. He eventually sold his business and became interested in southern California real estate speculation. His investments paid off when one of his properties was purchased by a conglomerate which used the land to build one of the largest retail shopping malls of its day.[citation needed] As a result, Molinaro was already financially independent when he decided to pursue his longtime dream of being an actor.

In the 1960s and 1970s, Molinaro studied acting and was offered guest roles on TV sitcoms, including Bewitched, Get Smart, Green Acres, and That Girl.

He took an improvisation class, in which Penny Marshall was one of the other students. In 1970, Marshall introduced him to her brother, producer Garry Marshall, who offered Molinaro the role of police officer Murray Greshler on the TV sitcom The Odd Couple, which starred Jack Klugman and Tony Randall. The show aired until 1975.

A memorial service for Albert Francis Molinaro. Information about event on Sysoon. [86217564-en]

Address and location of Albert Francis Molinaro which have been published. Click on the address to view a map.

QR Codes for the headstone of Albert Francis Molinaro

Sysoon is offering to add a QR code to the headstone of the deceased person. [86217564-en]

QR code for the grave of Albert Francis Molinaro