This memorial website was created in memory of our loved one, Amanchi Venkata Subrahmanyam, 56, born on January 2, 1957 and passed away on November 8, 2013.

The grave of Amanchi Venkata Subrahmanyam. We will remember him forever. Personal death notice and the information about the deceased. [86210421-en]
to show all important data, death records and obituaries absolutely for free!
2 January
Wednesday
56 years
20764 days
8 November
Friday
Images 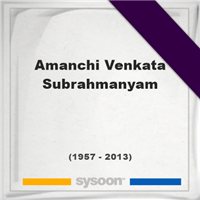 Amanchi Venkata Subrahmanyam was a journalist, actor, comedian, producer and director. He was born in 1957 January, 2nd at Tenali town, Guntur District, Andhra Pradesh. He was introduced to the film industry by director Bapu through his film Mister Pellam in the year 1993. With his first film Mr. Pellam, he became a comedy star in Telugu film. For his first film he bagged many awards including Nandi Award by Government of Andhra Pradesh. From then till now he acted nearly 500 films in the Past 19 years as comedian, villain and character artiste.

A memorial service for Amanchi Venkata Subrahmanyam. Information about event on Sysoon. [86210421-en]

Address and location of Amanchi Venkata Subrahmanyam which have been published. Click on the address to view a map.

QR Codes for the headstone of Amanchi Venkata Subrahmanyam

Sysoon is offering to add a QR code to the headstone of the deceased person. [86210421-en]

QR code for the grave of Amanchi Venkata Subrahmanyam