The grave of Benedikt Sarnov. We will remember him forever. Personal death notice and the information about the deceased. [86212206-en]
to show all important data, death records and obituaries absolutely for free!
4 January
Tuesday
87 years
31883 days
20 April
Sunday
Images 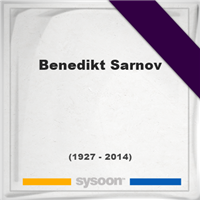 Biography and Life of Benedikt Sarnov

Benedikt Sarnov was a Moscow literary critic, historian of Soviet literature, and writer. After graduating from Gorky Institute of World Literature in 1951, he became a member of Union of Soviet Writers in 1960. He worked in the magazine Literary Gazette, created a popular literary radio program and authored a column about Russian prose in Ogonek. In 1990s he became Secretary of the Moscow Writers' Union, a part of Union of Russian Writers. He has published over twenty books, and hundreds of articles and reviews, and continues to be active in the post-Soviet period. His most recent books were about relationships of Stalin and Soviet writers and other intellectuals. He died in 2014.

A memorial service for Benedikt Sarnov. Information about event on Sysoon. [86212206-en]

Address and location of Benedikt Sarnov which have been published. Click on the address to view a map.

QR Codes for the headstone of Benedikt Sarnov

Sysoon is offering to add a QR code to the headstone of the deceased person. [86212206-en]

QR code for the grave of Benedikt Sarnov