The grave of Benjamin Tatar. We will remember him forever. Personal death notice and the information about the deceased. [86208458-en]
to show all important data, death records and obituaries absolutely for free!
23 January
Thursday
82 years
30261 days
29 November
Thursday
Images 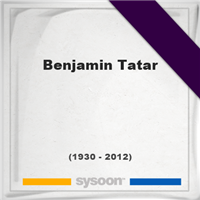 Biography and Life of Benjamin Tatar

He was an American film, television, theater, and voice actor. Tatar graduated from the University of Pittsburgh. His television career started in television for The Jimmie Rodgers Show and The Kate Smith Show. Later he earned a small acting role in the comedy Gigot. He was a director of dubbing for film companies. Tatar also wrote books and acted in theater. Tatar never married. He died on November 29, 2012 the cause of death was a chronic pulmonary disease.

A memorial service for Benjamin Tatar. Information about event on Sysoon. [86208458-en]

Address and location of Benjamin Tatar which have been published. Click on the address to view a map.

QR Codes for the headstone of Benjamin Tatar

Sysoon is offering to add a QR code to the headstone of the deceased person. [86208458-en]

QR code for the grave of Benjamin Tatar