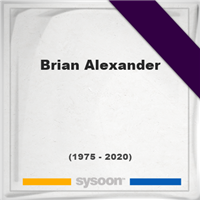 was an American professional basketball player who played for Salon Vilpas. He attended and played college basketball at the University of Detroit Mercy. In Alexander's senior year, the Titans were conference regular season champions behind a 12–2 MCC record and earned a berth into the 1998 NCAA Tournament. After upsetting St. John's in the first round, Alexander was asked by a reporter after the win about Dick Vitale and his response was "I didn't even know Dick Vitale coached at Detroit until after I got here," Titans center Brian Alexander said. "Hopefully, he'll talk about us now and wake up some people around the country who didn't know who we were and why we were invited to this tournament." Detroit lost in the round of 32 to a strong Purdue squad, ending their year with an overall record of 25–6. Considered one of the Top 50 Midwestern Collegiate Conference / Horizon League Players from (1994-2012).

A memorial service for Brian Alexander. Information about event on Sysoon. [86228076-en]

Brian Alexander at Archives.com. What is Archives

Military records of Brian Alexander at Fold3.com.  What is Fold3

Address and location of Brian Alexander which have been published. Click on the address to view a map.

QR Codes for the headstone of Brian Alexander

Sysoon is offering to add a QR code to the headstone of the deceased person. [86228076-en]

QR code for the grave of Brian Alexander