The grave of Charles Philip Bednarik. We will remember him forever. Personal death notice and the information about the deceased. [86215497-en]
to show all important data, death records and obituaries absolutely for free!
1 May
Friday
89 years
32831 days
21 March
Saturday
Images 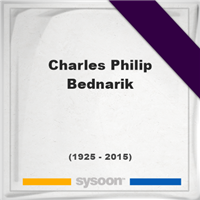 or Concrete Charlie, was a professional American football player, known as one of the most devastating tacklers in the history of football and the last full-time two-way player in the National Football League. A Slovak American from the Lehigh Valley region of Pennsylvania, Bednarik played for the Philadelphia Eagles from 1949 through 1962 and, upon retirement, was inducted into the Pro Football Hall of Fame in 1967 (his first year of eligibility).

A memorial service for Charles Philip Bednarik. Information about event on Sysoon. [86215497-en]

Address and location of Charles Philip Bednarik which have been published. Click on the address to view a map.

QR Codes for the headstone of Charles Philip Bednarik

Sysoon is offering to add a QR code to the headstone of the deceased person. [86215497-en]

QR code for the grave of Charles Philip Bednarik