The grave of Charles Vernon Bush. We will remember him forever. Personal death notice and the information about the deceased. [86208076-en]
to show all important data, death records and obituaries absolutely for free!
17 December
Sunday
72 years
26622 days
5 November
Monday
Images 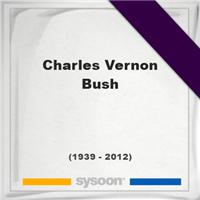 Was an African-American pioneer. He was first African-American graduate from the U.S. Air Force Academy. After graduating, he attended Air Intelligence Officers School and served at Westover Air Force Base. He served as an intelligence officer in Vietnam, too. Then returned back to the USA where he continued his professional career.

A memorial service for Charles Vernon Bush. Information about event on Sysoon. [86208076-en]

Address and location of Charles Vernon Bush which have been published. Click on the address to view a map.

QR Codes for the headstone of Charles Vernon Bush

Sysoon is offering to add a QR code to the headstone of the deceased person. [86208076-en]

QR code for the grave of Charles Vernon Bush