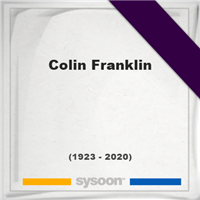 was an English writer, bibliographer, book-collector and antiquarian bookseller. Franklin was born in Notting Hill, London, into an affluent and influential British Jewish family. He was the son of Muriel Frances Waley (1894–1976) and Ellis Arthur Franklin (1894–1964), a London merchant banker. His sister was the posthumously-renowned biophysicist Rosalind Franklin. The uncle of Franklin's father was Herbert Samuel, 1st Viscount Samuel, who was Home Secretary in 1916 and the first practising Jew to serve in a British Cabinet; he was also the first High Commissioner (the Governor of a territory that is not a Colony) for the British Mandate of Palestine. Franklin's aunt, Helen Caroline Franklin, married Norman Bentwich, later the Attorney-General of the British Mandate of Palestine; she was active in trade union organisation and women's suffrage, then a member of the London County Council and was awarded a CBE in 1965.

A memorial service for Colin Franklin. Information about event on Sysoon. [86228096-en]

Colin Franklin at Archives.com. What is Archives

Military records of Colin Franklin at Fold3.com.  What is Fold3

Address and location of Colin Franklin which have been published. Click on the address to view a map.

QR Codes for the headstone of Colin Franklin

Sysoon is offering to add a QR code to the headstone of the deceased person. [86228096-en]

QR code for the grave of Colin Franklin