The grave of David Michael Staton. We will remember him forever. Personal death notice and the information about the deceased. [86212138-en]
to show all important data, death records and obituaries absolutely for free!
11 February
Sunday
74 years
27091 days
14 April
Monday
Images 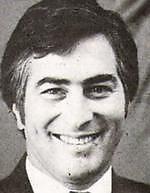 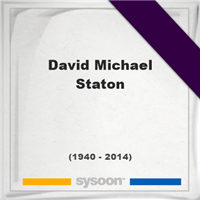 David Michael Staton better known as Mick Staton was an American politician. He was a Republican from West Virginia.

Staton was born in Parkersburg, a city in Wood County, West Virginia. He was a 1958 graduate of Parkersburg High School. He studied at Concord College in Athens, West Virginia, from 1961 until 1963. From 1957 to 1965, he served in the Army National Guard.

A memorial service for David Michael Staton. Information about event on Sysoon. [86212138-en]

Address and location of David Michael Staton which have been published. Click on the address to view a map.

QR Codes for the headstone of David Michael Staton

Sysoon is offering to add a QR code to the headstone of the deceased person. [86212138-en]

QR code for the grave of David Michael Staton