The grave of Dean Carroll Jones. We will remember him forever. Personal death notice and the information about the deceased. [86217096-en]
to show all important data, death records and obituaries absolutely for free!
25 January
Sunday
84 years
30900 days
1 September
Tuesday
Images 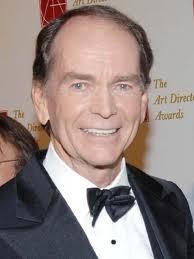 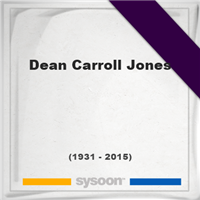 was an American actor.

Jones was best known for his light-hearted leading roles in several Walt Disney movies between 1965 and 1977, most notably The Love Bug. Jones also originated the role of Bobby in Stephen Sondheim's Company. Dean Carroll Jones was born in Decatur, Alabama, to Andrew Guy Jones, a traveling construction worker, and Nolia Elizabeth White Jones. As a student at Decatur's Riverside High School, Jones had his own local radio show, Dean Jones Sings. Jones served in the United States Navy during the Korean War, and after his discharge worked at the Bird Cage Theater at Knott's Berry Farm in Buena Park, California.

Jones attended Asbury University in Wilmore, Kentucky, as a member of its Class of 1953, but did not graduate. The university, however, awarded him an honorary degree in 2002, and he spoke at the ceremony for the dedication of Asbury's Andrew S. Miller Center for Communications Arts on March 4, 2011.

A memorial service for Dean Carroll Jones. Information about event on Sysoon. [86217096-en]

Address and location of Dean Carroll Jones which have been published. Click on the address to view a map.

QR Codes for the headstone of Dean Carroll Jones

Sysoon is offering to add a QR code to the headstone of the deceased person. [86217096-en]

QR code for the grave of Dean Carroll Jones