The grave of Frode Thingnæs. We will remember him forever. Personal death notice and the information about the deceased. [86208246-en]
to show all important data, death records and obituaries absolutely for free!
20 May
Monday
72 years
26354 days
15 July
Sunday
Images 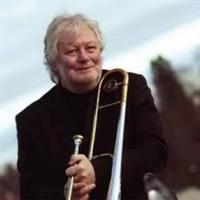 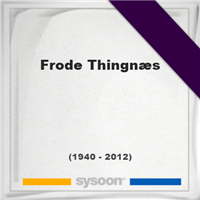 Biography and Life of Frode Thingnæs

He was a Norwegian trombonist, jazz composer, conductor and arranger. Thingnæs graduated at the Royal Danish Academy of Music in Kodan. As a composer, he was known for "Wheels" and "Flåklypa Ballet" at the Norwegian Opera. He played in numerous groups and led his own quintet, quartet and sextet. Two days before his death Thingnæs had a heart attack.

A memorial service for Frode Thingnæs. Information about event on Sysoon. [86208246-en]

Address and location of Frode Thingnæs which have been published. Click on the address to view a map.

Frode Thingnæs was born in Norway.

QR Codes for the headstone of Frode Thingnæs

Sysoon is offering to add a QR code to the headstone of the deceased person. [86208246-en]

QR code for the grave of Frode Thingnæs