The grave of Ghiath Tayfour. We will remember him forever. Personal death notice and the information about the deceased. [86207322-en]
to show all important data, death records and obituaries absolutely for free!
0 Unknown
Sunday
43 years
11 March
Sunday
Images 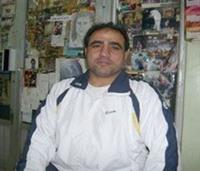 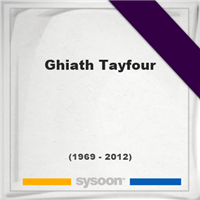 Biography and Life of Ghiath Tayfour

He was a Syrian boxing champion in Syria and winner of many titles including Syrian championships titles from 1984 to 1998. Tayfour was shot dead as he was driving his car near Aleppo University.

A memorial service for Ghiath Tayfour. Information about event on Sysoon. [86207322-en]

Address and location of Ghiath Tayfour which have been published. Click on the address to view a map.

QR Codes for the headstone of Ghiath Tayfour

Sysoon is offering to add a QR code to the headstone of the deceased person. [86207322-en]

QR code for the grave of Ghiath Tayfour