The grave of Harold Camping. We will remember him forever. Personal death notice and the information about the deceased. [86210827-en]
to show all important data, death records and obituaries absolutely for free!
19 July
Tuesday
92 years
33752 days
15 December
Sunday
Images 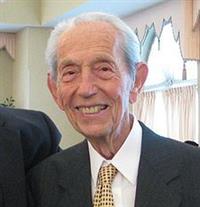 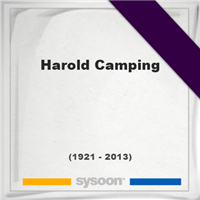 Biography and Life of Harold Camping

Harold Camping was an American Protestant Christian radio broadcaster, author and evangelist. Beginning in 1958, he served as president of Family Radio, a California-based radio station group that broadcasts to more than 150 markets in the United States. In October 2011, he retired from active broadcasting following a stroke, but still maintained a role at Family Radio. Camping is notable for issuing multiple failed predictions of dates for the End Times, which temporarily gained him a global following and millions of dollars of donations.

A memorial service for Harold Camping. Information about event on Sysoon. [86210827-en]

Address and location of Harold Camping which have been published. Click on the address to view a map.

QR Codes for the headstone of Harold Camping

Sysoon is offering to add a QR code to the headstone of the deceased person. [86210827-en]

QR code for the grave of Harold Camping