The grave of Helmuth Lohner. We will remember him forever. Personal death notice and the information about the deceased. [86216532-en]
to show all important data, death records and obituaries absolutely for free!
24 April
Monday
82 years
30010 days
23 June
Tuesday
Images 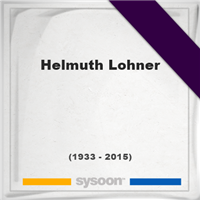 Place of birth:
Vienna / Austria (at)

Biography and Life of Helmuth Lohner

was an Austrian actor, theatre director, and from 1997 to 2006 director of the Theater in der Josefstadt. Born in Vienna, Lohner initially trained as a commercial artist, while also taking private acting lessons. He made his acting début in 1952 at the municipal theatre in Baden bei Wien. He also appeared as operetta buffo at the Stadttheater Klagenfurt. From 1953 to 1963 he appeared in various productions of the Theater in der Josefstadt, as well as making numerous film appearances.

A memorial service for Helmuth Lohner. Information about event on Sysoon. [86216532-en]

Address and location of Helmuth Lohner which have been published. Click on the address to view a map.

QR Codes for the headstone of Helmuth Lohner

Sysoon is offering to add a QR code to the headstone of the deceased person. [86216532-en]

QR code for the grave of Helmuth Lohner