The grave of Július Satinský. We will remember him forever. Personal death notice and the information about the deceased. [86208254-en]
to show all important data, death records and obituaries absolutely for free!
20 August
Wednesday
61 years
22411 days
29 December
Sunday
Images 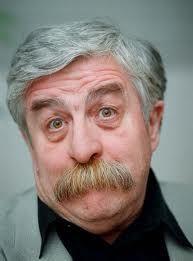 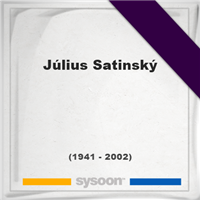 Biography and Life of Július Satinský

He was a celebrated Slovak actor, comedian, writer and playwright. He was known as a author of books for child. Satinský began his professional career in Czechoslovak Television in Bratislava as a editor, in 1964. He graduated dramaturgy at Academy of Music Arts in 1966. Satinský was the founder of modern Slovak humor, together with Milan Lasica. They were legendary pair for over 40 years, they played in the theater and television.

A memorial service for Július Satinský. Information about event on Sysoon. [86208254-en]

Address and location of Július Satinský which have been published. Click on the address to view a map.

QR Codes for the headstone of Július Satinský

Sysoon is offering to add a QR code to the headstone of the deceased person. [86208254-en]

QR code for the grave of Július Satinský