The grave of Jiřina Jirásková. We will remember him forever. Personal death notice and the information about the deceased. [86208346-en]
to show all important data, death records and obituaries absolutely for free!
17 February
Tuesday
81 years
29910 days
7 January
Monday
Images 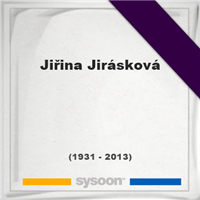 Biography and Life of Jiřina Jirásková

She was a famous Czech television, film and theater actress. Jiřina graduated on Prague Conservatory. One year after the school she began playing at the theater in Hradec Králové and then she was a member of the Vinohrady Theatre in Prague. She gained the biggest success with comedy Světáci of 1969 which filmed by her husband Zdeněk Podskalský. Throughout her career she played in many famous films like Smyk, Every Penny Counts, Daily courage, Wandering, Grandpa, Kylian and I House of Lost Souls, Světáci, Devil honeymoon, Samorost, Sun, hay, strawberries, My sinful man, Story '88, Sun, Hay and slapped, Sun, hay, erotic, Let's Make an Opera, Angel of the Lord, Rafters and many others. She died in his apartment in Prague's Vinohrady.

A memorial service for Jiřina Jirásková. Information about event on Sysoon. [86208346-en]

Address and location of Jiřina Jirásková which have been published. Click on the address to view a map.

QR Codes for the headstone of Jiřina Jirásková

Sysoon is offering to add a QR code to the headstone of the deceased person. [86208346-en]

QR code for the grave of Jiřina Jirásková