The grave of Jim Mutscheller. We will remember him forever. Personal death notice and the information about the deceased. [86215742-en]
to show all important data, death records and obituaries absolutely for free!
31 March
Monday
85 years
31056 days
10 April
Friday
Images 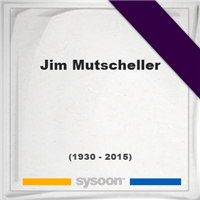 Biography and Life of Jim Mutscheller

was an American football player who played tight end for nine seasons for the Baltimore Colts. Mutscheller played football, basketball, and baseball at Beaver Falls High School, and three seasons of varsity football at Notre Dame under coach Frank Leahy from 1949 to 1951, including on the 1949 national championship team. Mutscheller played both defensive end and offense for the Fighting Irish, and served as team captain his senior year.

A memorial service for Jim Mutscheller. Information about event on Sysoon. [86215742-en]

Address and location of Jim Mutscheller which have been published. Click on the address to view a map.

QR Codes for the headstone of Jim Mutscheller

Sysoon is offering to add a QR code to the headstone of the deceased person. [86215742-en]

QR code for the grave of Jim Mutscheller