The grave of John Kenneth Small. We will remember him forever. Personal death notice and the information about the deceased. [86208635-en]
to show all important data, death records and obituaries absolutely for free!
20 November
Wednesday
66 years
24127 days
10 December
Monday
Images 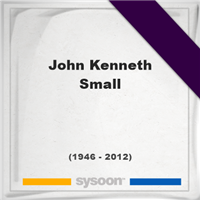 He was a popular American football linebacker. John Small graduated from the Academy of Richmond County and later attended The Citadel in Charleston. During his professional career he served for two teams Atlanta Falcons and Detroit Lions. John and his wife had together four children: Mary Allison, Stacy, John and Stephen. He died on December 10, 2012 in Augusta, Georgia.

A memorial service for John Kenneth Small. Information about event on Sysoon. [86208635-en]

Address and location of John Kenneth Small which have been published. Click on the address to view a map.

QR Codes for the headstone of John Kenneth Small

Sysoon is offering to add a QR code to the headstone of the deceased person. [86208635-en]

QR code for the grave of John Kenneth Small