The grave of John Preston Amis. We will remember him forever. Personal death notice and the information about the deceased. [86209462-en]
to show all important data, death records and obituaries absolutely for free!
17 June
Saturday
91 years
33283 days
1 August
Thursday
Images 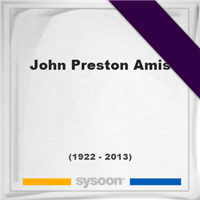 John Preston Amis was a British broadcaster, classical music critic, music administrator, and writer. He was a frequent contributor for The Guardian and to BBC Radio and Television music programming.

Born in Dulwich, London, in 1922, he was the cousin of the novelist Kingsley Amis. He was educated at Dulwich College, where he began a lifelong friendship with his contemporary, Donald Swann. A serious bout of mastoiditis as a child left him deaf in his left ear. He began his career working in a bank for five and a half weeks before leaving to earn a living in music. Amis had a number of roles, including gramophone record salesman, and orchestra manager (at one point turning pages for Dame Myra Hess during the wartime concerts at the National Gallery.), before becoming a music critic, initially with The Scotsman in 1946. He was for several years manager for Sir Thomas Beecham.

A memorial service for John Preston Amis. Information about event on Sysoon. [86209462-en]

Address and location of John Preston Amis which have been published. Click on the address to view a map.

QR Codes for the headstone of John Preston Amis

Sysoon is offering to add a QR code to the headstone of the deceased person. [86209462-en]

QR code for the grave of John Preston Amis