The grave of Kitanoumi Toshimitsu. We will remember him forever. Personal death notice and the information about the deceased. [86217674-en]
to show all important data, death records and obituaries absolutely for free!
16 May
Saturday
62 years
22833 days
20 November
Friday
Images 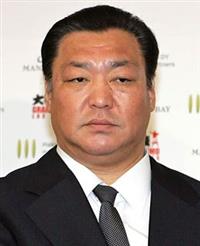 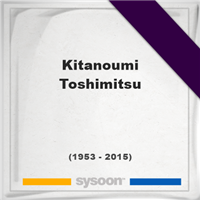 Biography and Life of Kitanoumi Toshimitsu

was a sumo wrestler. He was the dominant yokozuna in sumo during the 1970s. Kitanoumi was promoted to yokozuna at age 21, becoming the youngest ever to achieve sumo's top rank, and he remained a yokozuna for a record 63 tournaments. He won 24 tournament championships during his career and was one of a series of truly great yokozuna who came from Hokkaidō, the most northerly of the four main islands of Japan. Following his retirement in 1985 he established Kitanoumi stable. He was chairman of the Japan Sumo Association from 2002 until 2008, and from 2012 until his death.

A memorial service for Kitanoumi Toshimitsu. Information about event on Sysoon. [86217674-en]

Address and location of Kitanoumi Toshimitsu which have been published. Click on the address to view a map.

Kitanoumi Toshimitsu was born in Japan.

QR Codes for the headstone of Kitanoumi Toshimitsu

Sysoon is offering to add a QR code to the headstone of the deceased person. [86217674-en]

QR code for the grave of Kitanoumi Toshimitsu