The grave of Lennart Samuelsson . We will remember him forever. Personal death notice and the information about the deceased. [86208426-en]
to show all important data, death records and obituaries absolutely for free!
7 July
Monday
88 years
32285 days
27 November
Tuesday
Images 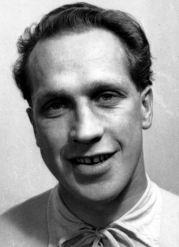 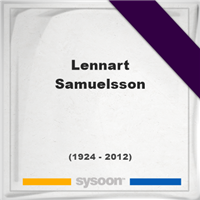 Biography and Life of Lennart Samuelsson

He was a Swedish football player and coach. Samuelsson played for the Sweden national football team and he helped to win bronze at the World Cup in Brazil in 1950 and the Olympics in Helsinki in 1952. He played also short time in Nice in the French league but he had to end his career because of a broken leg. After his active playing career he served as a coach in IFK Luleå, IK Brage and Örebro SK.

A memorial service for Lennart Samuelsson . Information about event on Sysoon. [86208426-en]

Address and location of Lennart Samuelsson which have been published. Click on the address to view a map.

QR Codes for the headstone of Lennart Samuelsson

Sysoon is offering to add a QR code to the headstone of the deceased person. [86208426-en]

QR code for the grave of Lennart Samuelsson