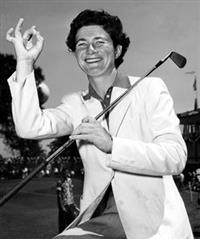 was an American professional golfer, one of the founders of the LPGA Tour and thus modern ladies' golf. Born in Atlanta, Suggs had a very successful amateur career, beginning as a teenager. She won the Georgia State Amateur in 1940 at age 16 and again in 1942, was the Southern Amateur Champion in 1941 and 1947, and won the North and South Women's Amateur three times (1942, 1946, 1948). She won the 1946 and 1947 Women's Western Amateur and the 1946 and 1947 Women's Western Open, which was designated as a major championship when the LPGA was founded. She also won the 1946 Titleholders Championship which was also subsequently designated as a women's major. She won the 1947 U.S. Women's Amateur and the next year won the British Ladies Amateur. She finished her amateur career representing the United States on the 1948 Curtis Cup Team

A memorial service for Mae Louise Suggs. Information about event on Sysoon. [86216875-en]

Mae Louise Suggs at Archives.com. What is Archives

Military records of Mae Louise Suggs at Fold3.com.  What is Fold3

Address and location of Mae Louise Suggs which have been published. Click on the address to view a map.

QR Codes for the headstone of Mae Louise Suggs

Sysoon is offering to add a QR code to the headstone of the deceased person. [86216875-en]

QR code for the grave of Mae Louise Suggs