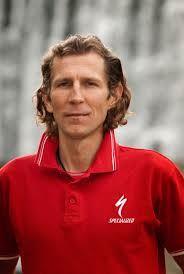 Marek Galiński was a Polish professional mountain biker. During his sporting career, he won eight Polish national championship titles and a silver medal in men's cross-country racing at the 2003 UCI World Cup series in Sankt Wendel, Germany. Galinski also represented his nation Poland in four editions of the Olympic Games (1996, 2000, 2004, and 2008), where he competed in men's mountain biking from the time that it officially became an Olympic sport in 1996. Galinski raced professionally for more than five seasons on the JBG2 Professional MTB Team.

A memorial service for Marek Galiński. Information about event on Sysoon. [86211859-en]

Marek Galiński at Archives.com. What is Archives

Military records of Marek Galiński at Fold3.com.  What is Fold3

Address and location of Marek Galiński which have been published. Click on the address to view a map.

Marek Galiński was born in Poland.

QR Codes for the headstone of Marek Galiński

Sysoon is offering to add a QR code to the headstone of the deceased person. [86211859-en]

QR code for the grave of Marek Galiński