The grave of Margaret Frances Lynch. We will remember him forever. Personal death notice and the information about the deceased. [86216776-en]
to show all important data, death records and obituaries absolutely for free!
25 November
Saturday
98 years
36036 days
25 July
Saturday
Images 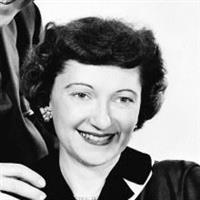 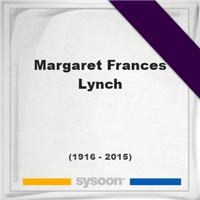 was an American writer and actor, and creator of the radio and television sitcom Ethel and Albert. She was one of the first women to star in, own, and write, singlehandedly, her own comedy series. In total, Lynch wrote nearly 11,000 scripts for radio and television.

A memorial service for Margaret Frances Lynch. Information about event on Sysoon. [86216776-en]

Address and location of Margaret Frances Lynch which have been published. Click on the address to view a map.

QR Codes for the headstone of Margaret Frances Lynch

Sysoon is offering to add a QR code to the headstone of the deceased person. [86216776-en]

QR code for the grave of Margaret Frances Lynch