The grave of Martin Jeff Krimski. We will remember him forever. Personal death notice and the information about the deceased. [86208256-en]
to show all important data, death records and obituaries absolutely for free!
12 December
Saturday
75 years
27733 days
16 November
Friday
Images 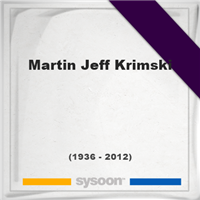 He was an popular American radio, television and film announcer. Known by the stage name Jefferson Kaye or Jeff Kaye. Jeff began his broadcast career in Providence, RI and then moved on to WBZ Radio in Boston. Krimski won several Sports Emmy Awards. He married Sue and they had together four children: Anne, Judith, Peter and Sarah

A memorial service for Martin Jeff Krimski. Information about event on Sysoon. [86208256-en]

Address and location of Martin Jeff Krimski which have been published. Click on the address to view a map.

QR Codes for the headstone of Martin Jeff Krimski

Sysoon is offering to add a QR code to the headstone of the deceased person. [86208256-en]

QR code for the grave of Martin Jeff Krimski