The grave of Michael David Apted. We will remember him forever. Personal death notice and the information about the deceased. [86212924-en]
to show all important data, death records and obituaries absolutely for free!
10 February
Monday
73 years
26807 days
4 July
Friday
Images 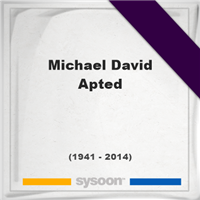 Michael David Apted is an English director, producer, writer and actor. He is one of the most prolific British film directors of his generation, and directed the Up Series of documentaries and the James Bond film The World Is Not Enough.

A memorial service for Michael David Apted. Information about event on Sysoon. [86212924-en]

Address and location of Michael David Apted which have been published. Click on the address to view a map.

QR Codes for the headstone of Michael David Apted

Sysoon is offering to add a QR code to the headstone of the deceased person. [86212924-en]

QR code for the grave of Michael David Apted