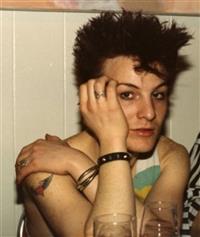 Flesh for Lulu was a rock band formed in Brixton, London, UK, active between 1982 and 1992, and more recently from 2013 to 2015, having reformed with a new lineup. Their music was a mix of the New York Dolls and Rolling Stones, with gothic rock's gloomy atmosphere and aesthetics, while also encompassing shades of punk, pop, country and western, Bolan, Bowie, rockabilly, garage and even a touch of Motown. Nick Marsh (vocals and guitar) and James Mitchell (drums) formed the band and soon recruited Rocco (originally from Wasted Youth, guitar and vocals), and Glen Bishop (bass), taking their name from an American cult movie. They signed to Polydor Records in 1983, and soon thereafter, bassist Glen Bishop left to join Under Two Flags, and was replaced by Kevin Mills (formerly of Specimen). Marsh died on June 5, 2015 from cancer.

A memorial service for Nick Marsh. Information about event on Sysoon. [86216385-en]

Nick Marsh at Archives.com. What is Archives

Military records of Nick Marsh at Fold3.com.  What is Fold3

Address and location of Nick Marsh which have been published. Click on the address to view a map.

QR Codes for the headstone of Nick Marsh

Sysoon is offering to add a QR code to the headstone of the deceased person. [86216385-en]

QR code for the grave of Nick Marsh Note: Do you have a family photo of Nick Marsh? Consider uploading your photo of Nick Marsh so that your pictures are included in Nick Marsh's genealogy, family trees & family history records. Sysoon enables anyone to create a free online tribute for a much loved relative or friend who has passed away.