The grave of Nour El-Sherif. We will remember him forever. Personal death notice and the information about the deceased. [86216914-en]
to show all important data, death records and obituaries absolutely for free!
28 April
Sunday
69 years
25307 days
11 August
Tuesday
Images 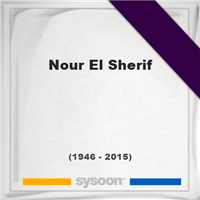 Biography and Life of Nour El-Sherif

El-Sherif was born in the working-class neighbourhood of Sayeda Zainab in Cairo (Arabic: السيدة زينب‎). El-Sherif was married to Poussi (1972–2006) and together they had two daughters, Sarah and Mai. He also played soccer before choosing acting as a career. Nour El-Sherif is sometimes credited as Nour El Cherif, Nour El-Cherif or Nour Al-Sharif.

A memorial service for Nour El-Sherif. Information about event on Sysoon. [86216914-en]

Address and location of Nour El-Sherif which have been published. Click on the address to view a map.

Nour El-Sherif was born in Egypt.

QR Codes for the headstone of Nour El-Sherif

Sysoon is offering to add a QR code to the headstone of the deceased person. [86216914-en]

QR code for the grave of Nour El-Sherif