The grave of Paul Mazursky. We will remember him forever. Personal death notice and the information about the deceased. [86212884-en]
to show all important data, death records and obituaries absolutely for free!
25 April
Friday
84 years
30747 days
30 June
Monday
Images 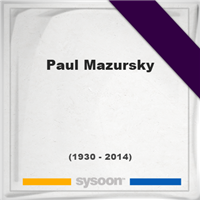 Biography and Life of Paul Mazursky

Paul Mazursky was an American film director, screenwriter, and actor. Acclaimed for his dramatic comedies, he was nominated for five Academy Awards: three times for Best Original Screenplay, once for Best Adapted Screenplay, and once for Best Picture for An Unmarried Woman (1978). Other notable films written and directed by Mazursky include Bob & Carol & Ted & Alice (1969), Harry and Tonto (1974), Moscow on the Hudson (1984), and Down and Out in Beverly Hills (1986).

A memorial service for Paul Mazursky. Information about event on Sysoon. [86212884-en]

Address and location of Paul Mazursky which have been published. Click on the address to view a map.

QR Codes for the headstone of Paul Mazursky

Sysoon is offering to add a QR code to the headstone of the deceased person. [86212884-en]

QR code for the grave of Paul Mazursky