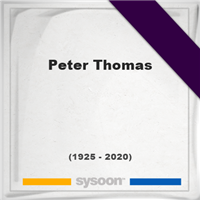 Place of birth:
Germany (de)
Place of death:
Italy (it)

was a German composer and arranger with an active career of more than 50 years. He was known for his TV and film soundtracks such as Raumpatrouille, the Edgar Wallace movies film series, and the Jerry Cotton film series. Thomas was born in Breslau, Silesia. In the 1950s, he played as a musician for the RIAS broadcaster, typically live.

The restored Brandenburg Gate in Berlin was re-opened in 2002 with a live version of the main theme of the Raumpatrouille soundtrack.

In his directorial debut, Confessions of a Dangerous Mind (2002), actor George Clooney used three tracks of Peter Thomas' music originally composed for Edgar Wallace movies of the 1960s (in their original mono versions). The 1990s avant-garde band Mr. Bungle performed his piece "Love In Space" on several dates of their 1995/1996 tour for Disco Volante. UK Plunderphonics and avant-garde band, The Perrinormal, name Peter Thomas as one of their main influences, alongside John Barry and Lalo Schifrin.

A memorial service for Peter Thomas. Information about event on Sysoon. [86228102-en]

Peter Thomas at Archives.com. What is Archives

Military records of Peter Thomas at Fold3.com.  What is Fold3

Address and location of Peter Thomas which have been published. Click on the address to view a map.

Peter Thomas was born in Germany.

QR Codes for the headstone of Peter Thomas

Sysoon is offering to add a QR code to the headstone of the deceased person. [86228102-en]

QR code for the grave of Peter Thomas Note: Do you have a family photo of Peter Thomas? Consider uploading your photo of Peter Thomas so that your pictures are included in Peter Thomas's genealogy, family trees & family history records. Sysoon enables anyone to create a free online tribute for a much loved relative or friend who has passed away.