The grave of Ruth Carter Stevenson. We will remember him forever. Personal death notice and the information about the deceased. [86209062-en]
to show all important data, death records and obituaries absolutely for free!
19 October
Friday
89 years
32587 days
6 January
Sunday
Images 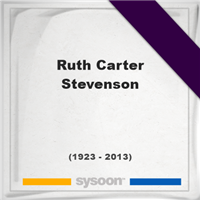 She was an American patron of the arts and also founder of the Amon Carter Museum in Fort Worth, one of the nation’s pre-eminent collections of American art. Stevenson was twice married. Her first marriage, with J. Lee Johnson III, ended in divorce. She is survived by five children from her first marriage, Sheila Broderick Johnson, Catherine Lehane Johnson, Karen Johnson Hixon, Mark Lehane Johnson and J. Lee Johnson IV. Her second husband was John Reese Stevenson, who died in 1997. Passed away on January 6, 2013 at her home in Fort Worth, Texas.

A memorial service for Ruth Carter Stevenson. Information about event on Sysoon. [86209062-en]

Address and location of Ruth Carter Stevenson which have been published. Click on the address to view a map.

QR Codes for the headstone of Ruth Carter Stevenson

Sysoon is offering to add a QR code to the headstone of the deceased person. [86209062-en]

QR code for the grave of Ruth Carter Stevenson