The grave of Sigmund Eisner. We will remember him forever. Personal death notice and the information about the deceased. [86208768-en]
to show all important data, death records and obituaries absolutely for free!
9 December
Thursday
92 years
33612 days
18 December
Tuesday
Images 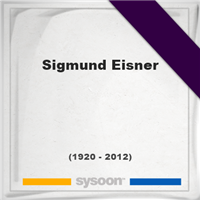 Biography and Life of Sigmund Eisner

He was an American scholar of medieval literature. Eisner taught at Oregon State University and Dominican College of San Rafael, California and later worked as a professor at the University of Arizona for over 40 years. He married Nancy Fereva Eisner and they had together six children: Kirpal Singh Khalsa, Chip Eisner, Nick Eisner, Tori Bacal, Halley Freitas and Cassie Habeck. Eisner passed away at his home on December 18, 2012.

A memorial service for Sigmund Eisner. Information about event on Sysoon. [86208768-en]

Address and location of Sigmund Eisner which have been published. Click on the address to view a map.

QR Codes for the headstone of Sigmund Eisner

Sysoon is offering to add a QR code to the headstone of the deceased person. [86208768-en]

QR code for the grave of Sigmund Eisner