The grave of Slobodan Rakitić. We will remember him forever. Personal death notice and the information about the deceased. [86208931-en]
to show all important data, death records and obituaries absolutely for free!
30 September
Monday
72 years
26391 days
1 January
Tuesday
Images 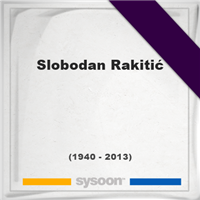 Biography and Life of Slobodan Rakitić

He was a Serbian writer and president of the Serbian Literary Cooperative. Rakitić graduated from the Faculty of Philology, the Department of Yugoslav and General Literature. Throughout his career he was the winner of the numerous literary awards, like Milan Rakic (1974), Isidora Sekulic (1982), Branko Miljkovic (1989), Laza Kostic (1995), Kocic's pen (1997), Jovan Ducic (1998), Prince Lazar's Gold Cross (1998) and Desanka Maksimovic (2002) and many others. He passed away on January 1, 2013.

A memorial service for Slobodan Rakitić. Information about event on Sysoon. [86208931-en]

Address and location of Slobodan Rakitić which have been published. Click on the address to view a map.

QR Codes for the headstone of Slobodan Rakitić

Sysoon is offering to add a QR code to the headstone of the deceased person. [86208931-en]

QR code for the grave of Slobodan Rakitić