The grave of Stanley Mackay Greig. We will remember him forever. Personal death notice and the information about the deceased. [86208280-en]
to show all important data, death records and obituaries absolutely for free!
12 August
Tuesday
82 years
30049 days
18 November
Sunday
Images 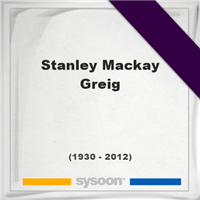 He was a popular Scottish pianist and drummer. He played behind Humphrey Lyttelton, Acker Bilk and George Melly among others. He was a stalwart of the British jazz scene for 60 years. Stan Greig was married and divorced twice. He had two daughters and one son from his first marriage.

A memorial service for Stanley Mackay Greig. Information about event on Sysoon. [86208280-en]

Address and location of Stanley Mackay Greig which have been published. Click on the address to view a map.

QR Codes for the headstone of Stanley Mackay Greig

Sysoon is offering to add a QR code to the headstone of the deceased person. [86208280-en]

QR code for the grave of Stanley Mackay Greig