The grave of Wilford Rex Black. We will remember him forever. Personal death notice and the information about the deceased. [86208652-en]
to show all important data, death records and obituaries absolutely for free!
0 Unknown
Tuesday
92 years
0 days
12 December
Wednesday
Images 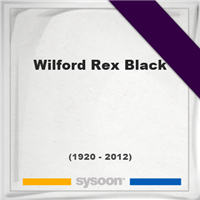 He was a man of many callings best-known as an American politician. Black was an active member in the LDS church, a temple worker, engineer for the Denver and Rio Grande Railroad and also served as a Senator in the Utah State Senate for 24 years. He married Helen Frazer and they had together eight children: Susan Blackwell, Janet Rytting, Cindy Fowler, Joy Miller, Peggy Shay, Vanna Roberts, Gayle Kilgrow, and Rex Black.

A memorial service for Wilford Rex Black. Information about event on Sysoon. [86208652-en]

Address and location of Wilford Rex Black which have been published. Click on the address to view a map.

QR Codes for the headstone of Wilford Rex Black

Sysoon is offering to add a QR code to the headstone of the deceased person. [86208652-en]

QR code for the grave of Wilford Rex Black