The grave of Barry Feinstein. We will remember him forever. Personal death notice and the information about the deceased. [86206280-en]
to show all important data, death records and obituaries absolutely for free!
0 Unknown
Monday
80 years
20 October
Thursday
Images 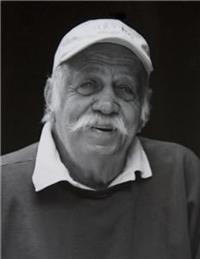 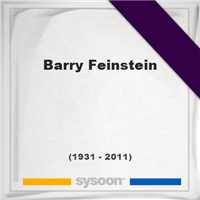 Biography and Life of Barry Feinstein

Feinstein was an American photographer and photo journalist. Feinstein established a career for himself snapping pictures of Hollywood stars such as Judy Garland and Steve MCQueen in the 1960s and 1970s, but he became most famous for his work with the top rock stars of that era.

He shot the memorable album covers for Dylan's The Times They Are A-Changin' in 1964 and for former Beatle Harrison's 1970 solo release, All Things Must Pass.

He was also responsible for the Rolling Stones' Beggars Banquet album artwork, which featured a graffiti-covered toilet. His work was most recently featured in director Martin Scorsese's new documentary, George Harrison: Living in the Material World.

A memorial service for Barry Feinstein. Information about event on Sysoon. [86206280-en]

Address and location of Barry Feinstein which have been published. Click on the address to view a map.

QR Codes for the headstone of Barry Feinstein

Sysoon is offering to add a QR code to the headstone of the deceased person. [86206280-en]

QR code for the grave of Barry Feinstein